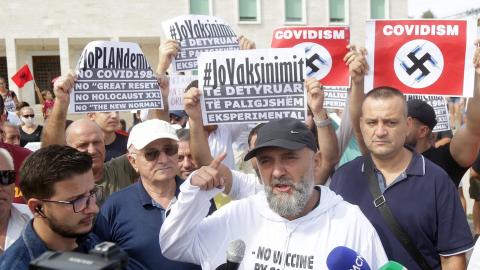 "I never say things that are not confirmed," Cako said, before adding that Fauci was in fact the "illegitimate son" of Mother Theresa, the Roman Catholic nun and missionary of Albanian heritage.

Such claims might sound outlandish, but the YouTube video of the interview published by Albanian ABC News has since been viewed more than 800,000 times, eliciting over 1,500 comments, most of them lauding the conspiracy theorist.

The COVID-19 pandemic has triggered an explosion of anti-vaccination conspiracy theories across the world. But while most are confined to social media, in Albania conspiracy theorists such as Cako have been embraced by the country's main broadcasters, making dozens of television appearances since the start of the pandemic in early 2020.

National broadcaster Top Channel has even given him a weekly slot on the Sunday afternoon talkshow 'Rrethi Katror'.

Data analysed by BIRN via the Facebook application Crowdtangle shows that Cako's comments on vaccines featured in more than 700 news items or videos posted on Facebook by Albanian media between March 2020 and August 2021, generating more than 2.95 million views and some 85,000 interactions on the most popular social media in the country.

With vaccination rates in Albania lagging behind much of the rest of the Balkans, not to mention Europe, communications experts have accused Albanian broadcasters of irresponsibly giving space to debunked conspiracy theories for the sake of their own commercial interests.

"The case of Alfred Cako is the most blatant: a media operating with a national licence has opened the doors of its studios repeatedly and continuously, almost each week, to a person who, in my opinion, is causing great damage," said Erlis Çela, a professor...