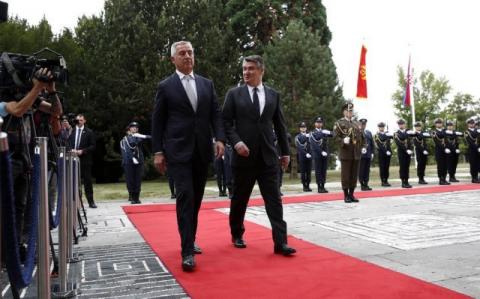 Yesterday's meeting between Montenegrin President Milo Djukanovic and Croatian President Zoran Milanovic was described by Milivojevic as an attempt by the two presidents to achieve their political goals on the Serbian issue in the region.
"We should bare in mind that both are weak in their home countries and that there is a problem of cohabitation in both Croatia and Montenegro. It should be emphasized that the governments of those countries did not directly participate in this, in Montenegro for known reasons, because the views of the current government and Mr Djukanovi are completely opposed, while in Croatia, there is also a problem in cohabitation between President Milanovic and Prime Minister Plenkovi, i.e. the HDZ government", Milivojevic pointed out. According to him, these are moves to provide political support in their own countries, but also to build a political alliance in the region, to which, as he says, Bosnia-Herzegovina and other countries in the region are inclined.
"I see this as an attempt to raise their political rating on the domestic scene and in the region and offer a topic that is perhaps somewhat more relevant at the moment than before, to build a political position on the anti-Serbism that prevailed in this meeting," Milivojevic said.
He stated how he can easily imagine that these actors start using a term that is widely used by the great powers about the malignant influence of Serbia in the region.
"It is obvious that one political alliance and one political bloc is being established in opposing Serbia's influence in the region, in a situation when Serbian influence has certainly increased in the region, when Serbia's policy yields results and when Serbia's interest matters, which brings into question those anti...

Floods in Serbia: A state of emergency has been introduced

Five "tank killers" from Cyprus: A powerful helicopter is arriving in Serbia

One mistake and... Volodymyr is in serious trouble, really

Kissinger's "prophecy": It's starting to resemble 1914

Floods in Serbia: A state of emergency has been introduced

British envoy: Neither the so-called Kosovo, nor Serbia...

A helicopter crashed near kindergarten: minister dies; Who shot it down? VIDEO/PHOTO

Brian Walsh accused of murdering his wife Ana from Belgrade; Her mother spoke up

A corpse found in the river Lim: It is suspected it's the missing girl from Priboj

Djokovic: I haven't seen this in 15 years VIDEO