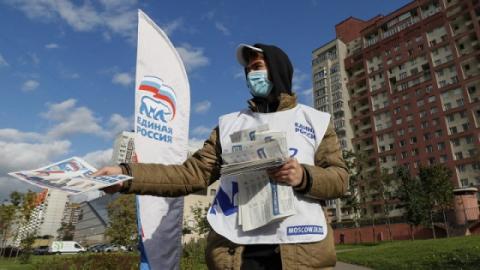 The European Parliament passed a resolution on Thursday (16 September) making a clear distinction between the Russian people and the regime of President Vladimir Putin, which it described as a "stagnating authoritarian kleptocracy led by a president-for-life surrounded by a circle of oligarchs".

The resolution, approved by 494 votes to 103, which came on the eve of a three-day vote to elect a new Russian parliament, states that a democratic future for Russia is possible and that the European Council must adopt an EU strategy for this scenario.

"If this week's parliamentary elections in Russia are recognised as fraudulent, the EU should not recognise the Russian Duma and should ask for the country to be suspended from international parliamentary assemblies, including the one of the Council of Europe," said Andrius Kubilius, the Lithuanian MEP who drafted the resolution, following the vote.

However, Russia's ruling party is expected to secure a resounding victory, although the voting conditions may fall short of democratic standards. Lawmakers demanded that the EU be prepared to withhold recognition of the election results if they are conducted in violation of democratic principles and international law.

The Parliament said the EU must establish an alliance with the United States and other like-minded partners to counterbalance the efforts of Russia and China to weaken democracy worldwide and destabilise Europe's political order. This broad alliance should foresee sanctions, policies to counter illicit financial flows, and support for human rights activists.

On Russia's aggression and influence on the EU's eastern neighbourhood, the EU must continue to support 'Eastern Partnership' countries like Ukraine and Georgia and to promote...