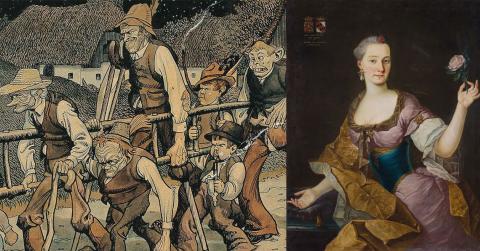 Trieste – Slofest, a festival of Slovenian culture in Italy, kicked off in Trieste on Friday to bring three days of programme presenting all activities of the Slovenian community in Italy: culture, art, sports and creativity. Schools are particularly invited.

Today, art workshops will be held, focusing on Trieste, a photo orienteering in the city, a lecture on Slovenians in Italy and guided tours of Trieste. Later in the day, a short play will be staged in Slovenian and Italian marking the 700th anniversary of death of Italian poet Dante Alighieri.

Various sports activities will be held in the late afternoon, when a trip to the Val Canale valley will also be possible. The first day of the festival will end with a concert by a string orchestra.

Unlike in the past when the main venue of the festival was Piazza della Borsa, this year the main events will be held in Piazza Sant’Antonio Nuovo.

Saturday will be dedicated to philosophy, books and libraries, fairy tales, discussions on multiculturalism, and discovering of Trieste’s Ponte Rosso bridge. In the evening, poetry by Srečko Kosovel will be presented in music by the mixed choir Ensemle Romjan.

In the spirit of the multiculturalism of the Friuli Venezia Giulia region, other communities – Serbian, Greek, Jewish and Lutheran – will also present themselves around the city as part of the festival.

After Sunday mass at the Church of Sant’Antonio Nuovo, which will be followed by a ceremony at the Lutheran church, a musical fairy tale will be staged. Families will be able to embark on a photo orienteering through the Slovenian parts of Trieste.

A presentation of a monograph by Marta Verginella entitled Donne e confini (Women and borders) will be accompanied by a debate on the role of borders and women in history, and the 30th anniversary of Slovenia’s independence.

In the afternoon, the 2021 Cergoly Prize will be conferred by the Club of Students from Trieste to a student work dealing with the multicultural and multilingual environment in Trieste, Austrian Littoral or the city of Rijeka.

In the afternoon, Resian poet Renato Quaglia will be presented before the festival closes with a surprise music event.

The festival was introduced by a number of events hosted by the Alliance of Slovenian Cultural Associations since June in the parts of Italy inhabited by Slovenians.

The post Fifth biannual festival of Slovenians in Italy kicks off appeared first on Slovenia Times.