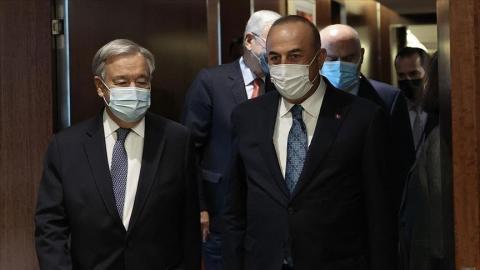 Top Turkish diplomat Mevlüt Çavuşoğlu met on Sept. 17 with U.N. Secretary-General Antonio Guterres as the international body prepares to host leaders from across the world next week.

Çavuşoğlu said his meeting with the U.N. chief focused on a number of regional and international issues, including Cyprus, Afghanistan, Libya, Syria, and climate change.

He did not provide additional details in his brief tweet but said in subsequent posts that he also sat down with recently-seated U.N. General Assembly President Abdulla Shahid. The former Maldivian foreign minister succeeded Turkish diplomat Volkan Bozkır at the helm of the General Assembly earlier this month ahead.

"Will continue to support the work of @UN," said Çavuşoğlu.

Meanwhile, Çavuşoğlu spoke over the phone with his French counterpart and discussed developments in Afghanistan, according to a Turkish diplomatic source on Friday.