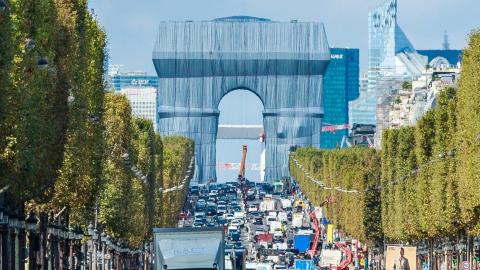 General view of the Champs-Elysees during the last preparations for the assembly of the 'Arc de Triomphe', September 16, 2021. Photo: EPA-EFE/CHRISTOPHE PETIT TESSON

"This is the achievement of a 60-year-old dream, a crazy dream come true," French President Emmanuel Macron said on Friday, during his visit to the location.

The public art project has been in different stages of development ever since 1961, when Christo and Jeanne-Claude first sketched out the wrapping of the arch.

French President Emmanuel Macron (R) speaks with rope access technicians during the inauguration of the Arc de Triomphe wrapped in silver-blue fabric as it was designed by the late artist Christo, in Paris, France, 16 September 2021. The monumental installation wraps the landmark Parisian monument under 25,000 square meters of silver and blue fabric. EPA-EFE/LUDOVIC MARIN / POOL RESTRICTED TO EDITORIAL USE - MANDATORY MENTION OF THE ARTIST UPON PUBLICATION - TO ILLUSTRATE THE EVENT AS SPECIFIED IN THE CAPTION / MAXPPP OUT EDITORIAL USE ONLY

Christo was born Hristo Yavashev in 1935 in Gabrovo, Bulgaria. Opposed to the postwar Communist regime, which nationalised his father's textile business, the family moved to Plovdiv in the early 1950s.

Frustrated by the limited possibilities for experimental art amid the rise of social realism at Sofia's National Academy of Arts, in 1956 Yavashev migrated illegally to Prague and then to Vienna.

"I am an artist and I want to do art that's impossible to create in Bulgaria", he wrote to his brother Anani in the same year. He later settled in Paris in 1958, where he found his partner, wife and creative collaborator, Frenchwoman Jeanne-Claude Denat de Guillebon.

Steeplejacks work on the last preparations on the assembly of...