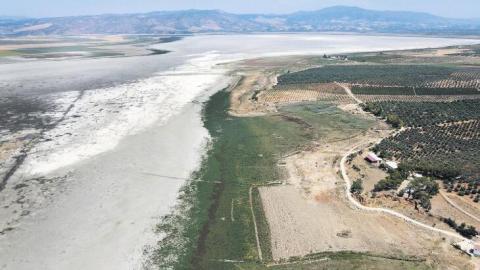 Racketeers are exploiting legal loopholes to grab lands on lakes and around dams that are drying due to drought and leasing them out for commercial agricultural activities, daily Milliyet has reported.

Those lands, which emerge when water levels in lakes or dams recede, are very fertile but they normally belong to the General Directorate of State Hydraulic Works (DSİ).

The issue was discussed at parliament's Climate Investigation Commission after authorities found that some individuals exploited legal loopholes and grabbed hundreds of acres of land on the dried-up Lake Marmara in the Gölmarmara district of the western province of Manisa, leasing them out to third parties.

Acting on complaints by locals, DSİ fined the land-grabbers and moved to protect the land on Lake Marmara by erecting a 12-kilometer-long fence. Authorities say the land-grabbers make millions of dollars by leasing out those lands.

Veysel Eroğlu, the chair of the parliamentary commission said this was not an isolated incident, but such land grabbing is happening in other drying lakes and dams.

Eroğlu urged authorities to inspect all aspects of the matter. "If those lands are of any use, the state should be the beneficiary, not the land-grabbers. The state should lease those lands out, and money to be raised must go to state coffers," he added.

"We are aware of this matter for a long time. We are using drones to see the situation on the ground. This has not happened only in Lake Marmara but also in the Demirköprü Dam," said Kaya Yıldız, the acting general manager of DSİ.

Yıldız noted that the agency in fact at times allows locals to use the land around some lakes and dams under a one-year lease.