Medical student studies at library he once worked as laborer 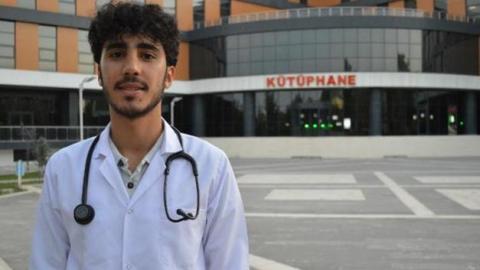 A medical student is now studying in the very same university's library where he once worked as a construction worker in 2017 in the eastern province of Elazığ.

"I have gained success after real hard work. I am happy, and this is a fantastic feeling," 23-year-old Hasan Coşkun told the Demirören News Agency.

The heartwarming tale emerged as Coşkun uploaded a selfie in front of the Fırat University's library, saying, "May it be true that I once worked in the construction of this library I am now studying in?"

Being a doctor was Coşkun's childhood dream. But life was not easy for him as he was born in a rural village in the Baskil district of the province.

"I always worked not to be a burden on my family. In summers, I was going to the city center to find temporary jobs to earn money," he said, recalling his past.

While one summer he worked as a cashier in a supermarket, the other as a worker in the apricot orchards. In June 2017, he became a laborer in the construction of the university library.

"They were tough days. I was working under the hot sun. Truly, I never dreamt that one day I would come to the library as a student when I was working as a construction worker there," he said.

"He is a great example to show what a man can do with hard work and determination," Fahrettin Göktaş, chancellor of the university, said in a meeting with Coşkun he organized after seeing the student's social media post.

"He serves as a role model to the young generation," the chancellor added.