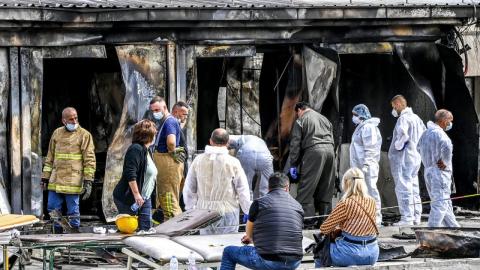 Prime Minister Zoran Zaev has rejected calls to temporarily shut all the other modular hospitals in North Macedonia as a precautionary measure, following a deadly fire in Tetovo hospital that killed 14 patients.

Zaev insisted that all 17 remaining modular facilities are working with boosted security and are invaluable in the fight against COVID infections.

"The modular hospitals are safe and built according to standards. They are of the same kind as elsewhere in the world. They have saved thousands of lives and at the moment some 200 of our citizens are there," Zaev told the media.

He said that meanwhile the authorities have boosted safety checks in the modular hospitals, which are also being regularly checked for fire security.

A rapidly spreading fire on September 8 engulfed most of the modular facility in Tetovo in minutes, leaving too little time for rescuers to pull everyone from the inferno. Some 14 patients perished while 12 other people were saved.

"The tragedy struck as all. We will remember it forever, as we lost lives. Let us wait to see the forensic reports and let us prevent such things from happening in the future," Zaev said.

Calls to temporarily shut all of the other modular facilities have come from various opposition leaders and observers.

On Thursday, the head of the opposition Alliance for Albanians, Zijadin Sella, a medical doctor by vocation, raised the issue of the safety of other modular facilities, considering that, as he told TV 24, "The hospital in Tetovo burned in just three minutes, as if it was a gas station".

The modular COVID-19 hospital in Tetovo was built earlier this year in the courtyard of the existing hospital and started operations on April 15.