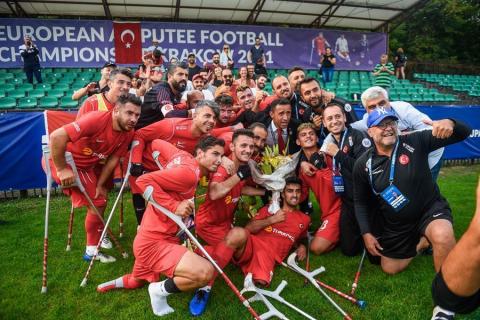 Turkish national amputee football team is playing against Ireland on Sept. 17 in the quarterfinal match at the European Championship in Krakow, Poland, eyeing to regain the success of 2017 and become the champion.

Turkey finished Group D as the leader with two heavy defeats against Georgia and Italy. On Sept. 13, Turkey beat Georgia 10-0 and smashed Italy with 11-0 at the group's second match on Sept. 15.

The official website of the championship praised the national team that scored 21 goals in just two matches.

"Turkey's impressive victory. European champions have proven that they are in a good fit," the website wrote after the win against Georgia.

"They are the biggest favorite in this tournament," the website said after the victory against Italy.

Turkey plays against Ireland, the second of Group C, on Sept 17 at the quarterfinal match. Semifinals will be played on Sept. 18 and the trophy will go to the champion at the last match of the tournament on Sept. 19.

Being third at the World Amputee Championship in 2007, the country's national team bagged the trophy in the European Champ in Istanbul in 2017.