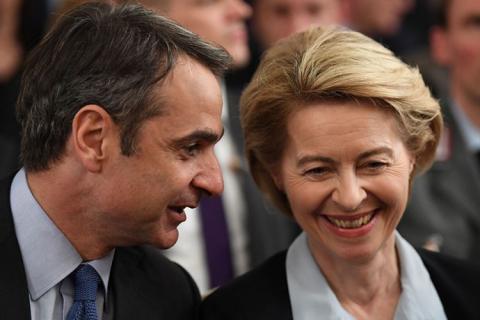 European Commission President Ursula von der Leyen will attend today's Med9 summit in Athens, where the leaders will focus their talks on climate change and environmental protection in the aftermath of Greece's disastrous wildfires that destroyed about 130,000 hectares in August during a heat wave.

Portugal was also besieged by wildfires in 2017 in which over 60 people died nationwide and in which 45,000 hectares of land burned down.

The leaders of Greece, Cyprus, France, Italy, Malta, Portugal, Spain, as well as Croatia and Slovenia, which were last-minute additions, will be participating.

Although the summit will focus on climate change, environmental protection, and the need for cooperation between the Mediterranean countries in confronting common challenges, another major issues to be discussed is the prospect of a refugee crisis after recent developments in Afghanistan.

The session on climate change and its repercussions will take place in the early afternoon.

"Greece attaches great importance to securing stability in the regions of the...