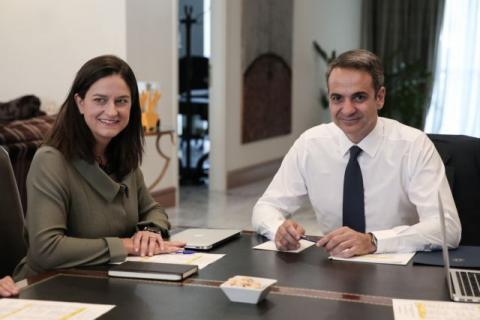 The ministries of health and of education have launched a push to persuade the parents of school students to vaccinate their children.

Health Minister Niki Kerameus in an interview with Open television revealed that just 17 percent of students between the ages of 12-15 and 30 percent of senior high school (lykeio) students have been vaccinated with at least one jab but that the rate is gradually rising.

While encouraging the vaccination of students, Kerameus stressed that the frequent testing that has been introduced in schools is especially important in preventing transmission of the virus, as the health ministry does not have the capacity to pare down the number of students in classrooms nationwide.

Unvaccinated students will have to take two COVID-19 self-tests weekly and report the results on a special platform or with a signed legal declaration.

to normalcy! We now have the vaccine. Teachers responded en masse [to the call for vaccination]," Kerameus declared.
In a spate of interviews and statements, the minister has described the vaccine as "a huge gift of science" that should be utilised.

The president of the National Committee on Vaccination, Maria Theodoridou, a University of Athens professor emerita of paediatrics with a specialisation in infectious diseases, has said that about 20 percent of newly-confirmed COVID-19 cases involve children.

The ministry's stated policy of shutting down classes only if 50 percent of students test positive has stirred concerns among parents, who fear that it greatly increases the possibility of their...