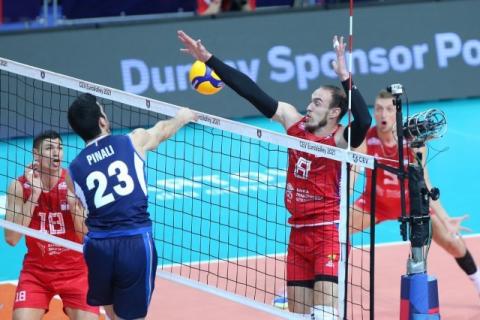 Slobodan Kova's team was defeated by Italy in the semifinals of the European Championship in Katowice with the result 3: 1 (29:27, 25:22, 23:25, 25:18).
In the fight for the third place and the bronze medal, Serbia will play against Poland on Sunday at 5.30 pm, which lost to Slovenia 3: 1 in the first semifinal.
The defender of the trophy was not at the level from, say, the quarterfinals when the Netherlands was defeated with a brilliant game.
First of all, Uro Kovaevi was out of rhythm, because evidently the Italians paid special attention to a left-handed outside hitter.
The Italians served brilliantly through Simone Giannelli, while the tall Alessandro Michieletto bombed from all positions.
Often, Serbia had a problem at this championship to bring to an end the set in which it led, which was seen in the first two sets.
Although it seemed that it would be the same in the finish of the third, in which it allowed the Italians to come back to life from 19:17, Serbia still reached the moment of inspiration and extension of hope.
However, already at the start of the fourth set, Serbia allowed a series of 5: 0 on the services of Giannelli, and that introduced the decisive part of this match into the "one-way street".
The Italians completely scored from all positions and in the end routinely brought the match to an end, advancing to the finals.