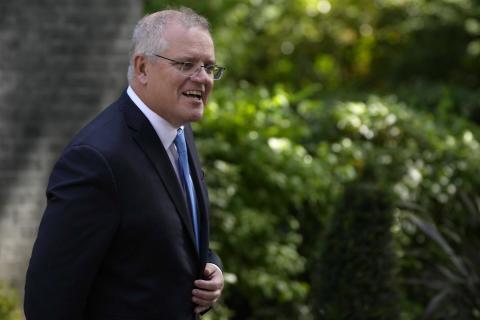 Australian Prime Minister Scott Morrison on Sept. 19 rejected France's accusations Canberra lied about plans to cancel a contract to buy French submarines, saying he had raised concerns over the deal "some months ago".

Australia's decision to tear up a deal for the French submarines in favor of American nuclear-powered vessels sparked outrage in Paris, with President Emmanuel Macron recalling France's ambassadors to Canberra and Washington in an unprecedented move.

Canberra has stood firm as France aired accusations of betrayal, with Morrison insisting he and his ministers previously communicated their issues about the French vessels.

"I think they would have had every reason to know that we had deep and grave concerns that the capability being delivered by the Attack Class submarine was not going to meet our strategic interests and we made very clear that we would be making a decision based on our strategic national interest," he told reporters in Sydney.

"There has been lying, duplicity, a major breach of trust and contempt," Le Drian told France 2 television. "This will not do."

He described the withdrawal of the ambassadors for the first time in the history of relations with the countries as a "very symbolic" act that aimed "to show how unhappy we are and that there is a serious crisis between us".

The French contract to supply conventional submarines to Australia was worth Aus$50 billion [$36.5 billion, 31 billion euros] when signed in 2016.