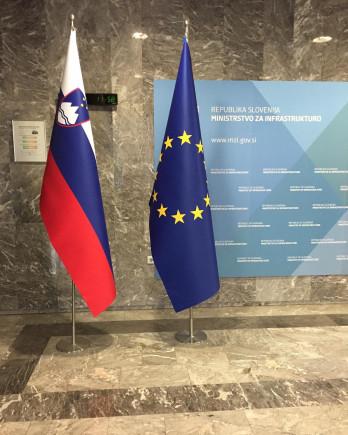 Strasbourg – The first of four citizens’ panels held as part of the Conference on the Future of Europe wrapped up on Sunday. Slovenia’s two participants, Rok Ropret, 29, and Max Marolt, 22, said they were leaving Strasbourg with positive impressions and satisfied with the debate.

“I had high expectations and I think they have been met,” Marolt, a student of international and European law, told the STA.

Ropret, a ski instructor, described the debate as a very good and active exchange of opinions. The participants realised they shared many of the same views and identified the same problems.

Marolt said he was “very positively surprised at the similar problems we have in Europe despite being of different nationalities, including discrimination and pay inequality. We talked a lot about universal basic income.”

Other topics debated included digitalisation and internet use, the economy, jobs, and youths.

The participants of each of the four panels will hold three meetings, the first meeting setting the framework for the subsequent debate.

Citizens’ panels are a core element of the Conference on the Future of Europe. The participants were chosen randomly by a pollster based on a variety of criteria. More than a third are under 25.

The second of panel will be held in Strasbourg next weekend. The participants will be addressed by the co-chair of the Conference’s executive board, Slovenian Foreign Ministry State Secretary Gašper Dovžan.

The post Slovenian participants satisfied with debate on future of Europe appeared first on Slovenia Times.