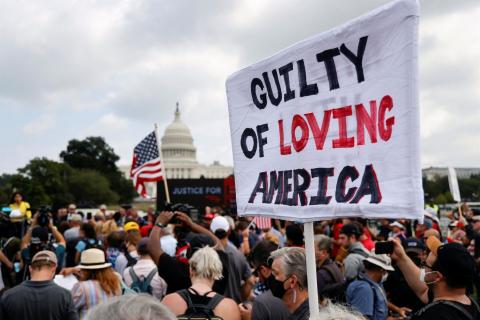 A few hundred protesters turned up on Sept. 18 in Washington to rally in support of the pro-Trump rioters who ransacked the U.S. Capitol on January 6, but they were outnumbered by a robust security presence and journalists.

Police who were caught on the back foot by the deadly riot on Capitol Hill took no chances this time: they used a security fence around the Capitol complex, police in riot gear and rows of armored trucks to keep the peace.

Organizers of the "Justice for J6" rally - who said they wanted to draw attention to those held over the riot who did not commit violent offenses - had received a permit for 700 people to gather near the Capitol's reflecting pool, but far fewer showed up.

Chants of "Let them go!" rose from the demonstrators as speakers took to the podium to decry what they called President Joe Biden's administration detention of "political prisoners."

"Their rights are being violated," David Thacker, a 63-year-old attendee from Virginia, told AFP. "Their crimes do not justify the way they are being treated."

Members of Congress were not in the building on Sept. 18 as the rally unfolded under the watchful eye of police in riot gear with shields, with many lawmakers still on summer recess and not back in town until next week.

Look Ahead America, which organized the event and is planning similar rallies across the country in the coming weeks, had appealed for attendees to show respect to law enforcement officers and refrain from bringing Donald Trump banners.

But some carried signs that read "Free Biden's political prisoners" or "Justice for Ashli Babbitt," a woman who was shot dead by police on January 6 as she tried to breach the House of Representatives.