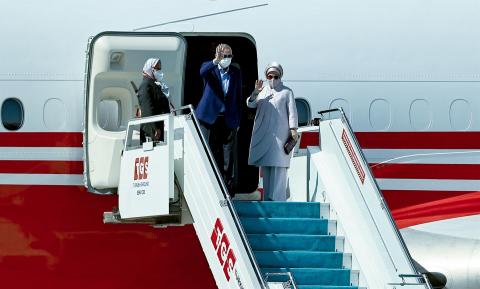 Turkey never hesitates in providing humanitarian support to Afghanistan, President Recep Tayyip Erdoğan said on Sept. 19, noting that this aid would be provided both by the state and civil society.

"There will show no hesitation in humanitarian aid. We will send such aids both as the state and with our NGOs," he said at a news conference before departing for New York to attend the United Nations General Assembly.

Elaborating his program in the U.S., Erdoğan said he will address the assembly on Sept.21.

"In my speech, I will emphasize Turkey's strong support for multilateralism and the goal of establishing a fairer world order. I will share our views on the main issues on the agenda of the United Nations. I will express our approach to the challenges that threaten all of humanity," he stated.

Erdoğan said that this year's General Assembly was held with the theme "Overcoming the COVID-19 Pandemic, Rebuilding Sustainability, Responding to the Needs of the Planet, Respecting Human Rights and Establishing Resilience Through Hope for the Revival of the United Nations."

"Issues of health, climate, and sustainable development, to which we attach great importance and play a leading role, are heavily on the agenda of the plenary discussions," he said.

He recalled that some of the events within the scope of the General Assembly will be online and said he would participate in the U.N. Food Systems Summit and the U.N. High-Level Energy Dialogue Meeting with a video message.

Adding that that at the meeting Turkey will give "a message about migrants," Erdoğan said. "We are the ones who bear the biggest burden of this."

Erdoğan noted that he would have bilateral meetings with the U.N. Secretary-General as well as with many...