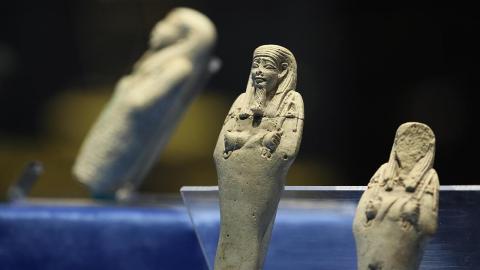 The 2,700-year-old Ushabti statuettes used in funeral rituals in ancient Egypt and found in archaeological excavations in western Turkey began to be exhibited for the first time at the İzmir Archaeology Museum.

Ushabti figures, small statuettes made of wood, stone, or faience, are often found in large numbers in ancient Egyptian tombs.

Three ceramic Ushabti figurines found in Anatolia are out on display for their guests at the museum.

Aiming to introduce a different artifact to local and foreign visitors every month, the Izmir Archeology Museum has brought the breezes of the River Nile to Turkey this September.

Preserved for about 80 years in the warehouses of the İzmir Archaeology Museum, the figurines indicate longstanding commercial and cultural relations between Egypt and Anatolia.

The figurines, with hieroglyphic inscriptions saying, "ready for calls of duty of gods," will remain open to visitors in the treasury hall of the Izmir Archaeological Museum until the end of the month.

"We know that Anatolia and Egypt had very important deep-rooted relations in the fields of politics, culture, art, and trade in every period of history," Hünkar Keser, the director of the İzmir Archaeology Museum, told the state-run Anadolu Agency.