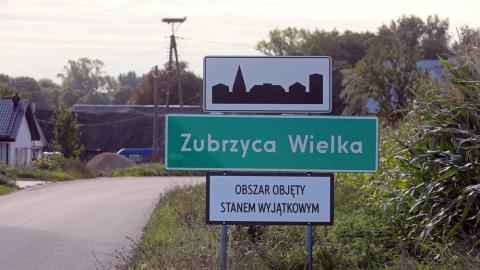 A view of an information board regarding the state of emergency near the border with Belarus in Zubrzyca Wielka, northeastern Poland, 03 September 2021. EPA-EFE/Artur Reszko

One of them was an Iraqi man, found on Sunday by Polish border guards near the village of Dworczysko, together with two others, all suffering from hypothermia. The two still alive are recovering in hospital.

The other two dead men, whose identities and nationalities are so far unknown, were found in separate locations.

Meanwhile, the Belarusian authorities confirmed on Sunday the discovery on their side of the border the body of a 39-year-old Iraqi woman. According to a statement by Belarusian border guards, the woman's family was found nearby the body, including three children aged between seven and 15. The woman's husband told the Belarusian state agency BelTA that the family had been pushed back into Belarus by Polish border guards.

At the press conference on Monday morning, Polish Prime Minister Mateusz Morawiecki and Interior Minister Mariusz Kaminski stressed the responsibility of the Belarusian regime in driving migrants into Poland.

Since early August, thousands of people, mostly from the Middle East and Afghanistan, have been attempting to cross the borders that Belarus shares with Poland, Latvia and Lithuania. These migrants have been encouraged to travel to Belarus by the regime of autocratic leader Aleksandr Lukashenko, with the sole purpose of fomenting a crisis in retaliation for EU sanctions imposed on his regime over the rigged presidential election in 2020 and subsequent violent crackdown on critics and demonstrators.

Referring to the Iraqi man who died, Kaminski suggested he was acting erratically and there were suspicions he could have been...