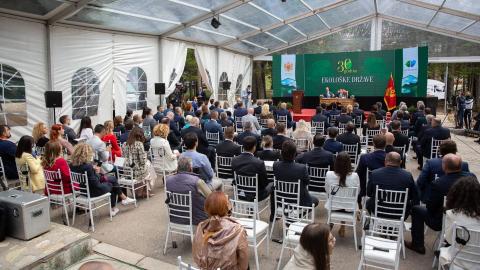 Montenegrin parliament session in the town of Zabljak. Photo: Parliament of Montenegro

Milorad Mitrovic and Husein Pajovic, members of the Breznica NGO, erected a banner and sounded a siren ahead of a special parliament session in the town of Zabljak on the eve of Monday's 30th anniversary of the Zabljak declaration, when Montenegro became the first country in the world to declare itself an 'ecological state' and vowed to safeguard its natural resources.

Environmental groups say the promise was betrayed through 30 years of uninterrupted rule by the Democratic Party of Socialists, DPS, which was pushed from power late last year, and that Sunday's parliament session marking the anniversary was hypocritical.

"By our actions, we have not caused any harm to anyone," Mitrovic told reporters. "We also didn't commit any misdemeanor or criminal offense as the only goal was to express our position, which the Constitution and laws guarantee."

On Monday, the NGO Institute Alternative called on Montenegrin police chief Zoran Brdjanin to explain the grounds for charging the two activists, while the Coalition for Sustainable Development, KOR, questioned whether last year's change of government would bring any change in environmental policy.

"While police are questioning civic activists, state authorities are failing to bring to justice those who continuously devastate the environment," KOR said in a statement on Monday. "Despite the long-awaited change in government, the violation of our constitutional right to a healthy environment continues."

For years before its downfall, the DPS was accused of presiding over a deeply corrupt, practically feudal system of government that paid little heed to environmental concerns as it sought to exploit the...