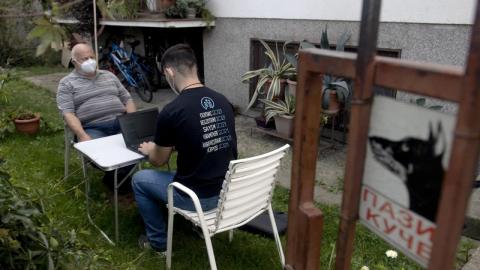 Despite the difficulties it has encountered, the head count in North Macedonia at the moment is going well, the authorities said on Monday, expressing hope that the first census for almost two decades will come to a successful conclusion in ten days' time.

"I personally believe that the head count will be successful. But still, let us not rush to conclusions as we have some ten more days," Prime Minister Zoran Zaev told media on Monday.

Zaev said that so far more than one million residents have already been registered, and that on average the 5,000 census-takers are managing to register some 100,000 residents each day, which he said is the correct pace.

Apostol Simovski, the head of the State Statistical Agency, the body in charge of the operation, also expressed optimism, saying at the weekend that the number of people refusing to participate is minor.

Simovski said that his earlier predictions that the country has fewer residents than at the time of the last census in 2002, mainly as a result of economic emigration, could come true.

Earlier this year Simovski said that his predictions suggested North Macedonia has no more than 1.8 million residents, which is some 300,000 less than the 2.1 million in 2002.

The positive notes about the census come against a backdrop of technical problems that the operation encountered in the first few days, when due to glitches in the digital system for data collection, many census-takers sst idle, in some case for four consecutive days.

While the authorities insist that all is going well, fears remain that ethnic issues and health concerns might overshadow the entire operation.