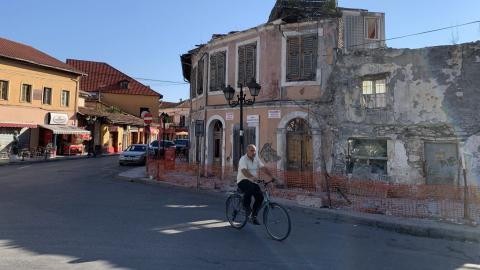 That lump of plaster fell from one of the many old and unmaintained houses of the neighbourhood of a town with a long history as a centre of trade and administration.

Over those centuries, many large walled houses were built. However, scores of these buildings are collapsing one after another due to abandonment, bureaucratic obstacles and lack of attention.

"The protected area of the town currently faces ruin," said Besi Bekteshi, a former director at the Regional Directorate for Cultural Heritage. Some 28 buildings classified as important for the history of the town are in urgent need for repair, he added.

Experts told BIRN that the degradation of monuments of culture in Shkodra is the result of wrong investments done in the past and general neglect from both central and local government.

Investments only in facades

Investments in Gjuhadol neighbourhood have been few, and some reconstruction work done a few years ago is already considered obsolete and short-lived.

In 2013, a fund of 800,000 euros from the European Union, the Ministry of Culture and the Municipality of Shkodra helped reconstruct some houses. Facades facing the main streets were replastered and painted while sidewalks and streetlamps were renewed. The main cobblestoned road was redone.

However, Zef Çuni, an architect and former Deputy Minister of Culture told BIRN the project wasn't large enough and the quality of the work was poor.

"Rain pours down the newly painted façades if roofs are not repaired," he added, noting that even the façade reconstructions were of poor quality. "It...