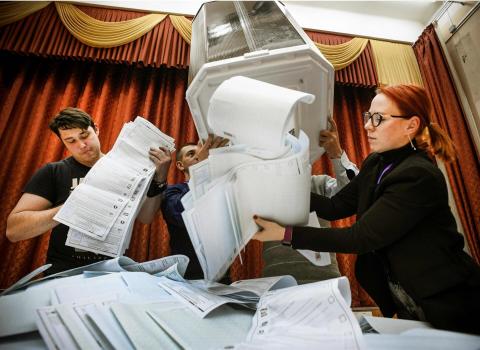 Russia's ruling United Russia party, which supports President Vladimir Putin, retained its parliamentary majority after an election and a sweeping crackdown on its critics, despite losing over a tenth of its support, partial results on Sept. 20 showed.

With 64 percent of ballots counted, the Central Election Commission said United Russia had won nearly 48 percent of the vote, with its nearest rival, the Communist Party, at about 21 percent.

Although that amounts to an emphatic win, it looks like a somewhat weaker performance for United Russia than the last time a parliamentary election was held in 2016, when the party won just over 54 percent of the vote.

A malaise over years of faltering living standards and allegations of corruption from jailed Kremlin critic Alexei Navalny have drained some support, compounded by a tactical voting campaign organized by Navalny's allies.     Kremlin critics, who alleged large-scale vote rigging, said the election was in any case a sham.

United Russia would have fared worse in a fair contest, given a pre-election crackdown that outlawed Navalny's movement, barred his allies from running and targeted critical media and non-governmental organizations, they said.

Electoral authorities said they had voided any results at voting stations where there had been obvious irregularities and that the overall contest had been fair.

The outcome looks unlikely to change the political landscape, with Putin, who has been in power as president or prime minister since 1999, still dominating ahead of the next presidential election in 2024. Putin has yet to say whether he will run. He was due to speak on Sept. 20.

The 68-year-old leader remains a popular figure with many Russians...