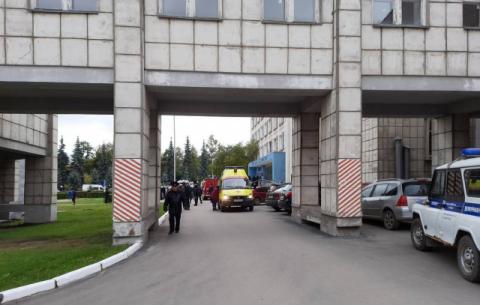 The student who opened fire at Perm State University on Monday will go through a comprehensive psychiatric examination, a medical source from hospital said.

"The student will need to go through a comprehensive psychiatric examination, which will make it clear whether he was sane and responsible for his actions at the time of the attack," the source pointed out.

The 18-year-old shooter, Timur Bekmansurov, remains hospitalized and is said to be in serious condition.

According to the Russian investigators, the Perm State University shooting killed six and left 28 injured. The attacker, a student at the university, resisted police and was wounded.

The Investigative Committee is pursuing a multiple homicide charge against the perpetrator.

Most of those injured in a shooting incident at Perm State University are getting better, Russian Minister of Science and Higher Education  Falkov said at a meeting of the Perm region's Council of University Rectors on Tuesday.

"Yesterday, we had the opportunity to visit those hospitalized. Most of them are getting better," he noted.

The meeting observed a minute of silence in memory of those killed in the attack. Falkov pointed out that the injured and the families of the victims would get the necessary assistance, including psychological support, first and foremost, through the efforts of the regional government and university authorities.

The Perm region declared a day of mourning on Tuesday over the shooting incident. According to the Russian Health Ministry, the attack killed six and left 24 injured, 20 of whom remain hospitalized. Falkov said earlier that seven injured people would be flown to Moscow for treatment.