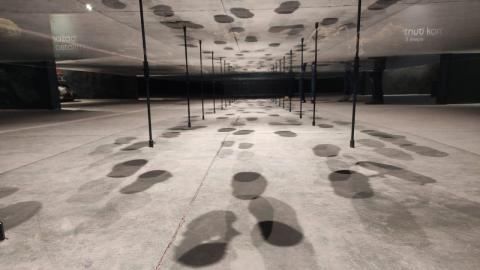 An exhibition entitled 'Footsteps of Those Who Did (Not) Cross' opened on Monday at the Srebrenica Memorial Centre, displaying the personal belongings of people who were killed by Bosnian Serb forces in July 1995, as well as items owned by people who survived.

Curator Azir Osmanovic explained that some of the items were found on the route between Srebrenica and Nezuk - the path taken by the so-called 'march of death', along which many Bosniaks were killed as they tried to escape to safety.

Osmanovic said that while putting together the exhibition, the curators visited places where people tried to hide in July 1995, some remaining concealed for days or even months. They also spoke to survivors who described individual locations and things they had with them while fleeing.

The exhibition contains 100 pieces of footwear, but there also other items that people used in their makeshift refuges, including a hand-made stove which someone cooked with in the cave where they were hiding.

"This is an attempt to depict the suffering of people from July 1995 until October through items which those people used and through the personal testimonies of those people," Osmanovic said.

"We have one man talking about his survival. He spent nearly three months in the woods. So I hope the visitors will briefly get a more complete image of the Srebrenica genocide when they come and see this exhibition," he added.

The exhibition helps to mark the 18th anniversary of the opening of the Srebrenica Memorial Centre. Before the opening itself, flowers were laid and prayer said for the victims.

In July 1995, more than 7,000 men and boys from Srebrenica were killed, and more than 40,000 women, children and elderly people were expelled.