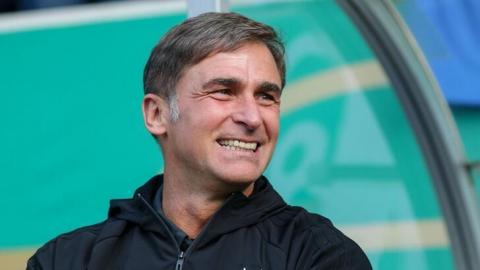 Germany's Under-21 coach Stefan Kuntz is set to take over the reins of the Turkish national team, the Turkish Football Federation announced on Sept. 19.

The 58-year-old, who played in the Germany side that won the 1996 European Championship, will sign on Sept. 20 at 1200 GMT at the Riva Hasan Doğan national team training center.

"The board of directors of the Turkish Football Federation has reached an agreement with Mr. Stefan Kuntz as the new coach of the national team," the federation said in a statement.

The 58-year-old German is set to replace Şenol Güneş, whose stint ended with mutual consent after a string of poor results that culminated in this month's 6-1 World Cup qualifier loss to the Netherlands.

The details of the deal with the new coach were not immediately revealed.

Kuntz has twice coached Germany to the European title at Under-21 level, most recently in June when they beat Portugal 1-0 in the final.

Turkey is not unknown to Kuntz, having played for Istanbul club Beşiktaş in the 1995/96 season.