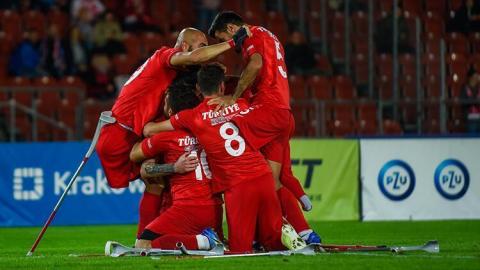 Turkish national amputee football team has yet again bagged the European Championship title by defeating Spain 6-0, marking the victory for the second time in a row.

The team clinched the trophy with a hat trick from Ömer Güleryüz, a brace from Kemal Güleş and a goal from Rahmi Özcan at Cracovia Stadium in Krakow, Poland.

They dominated the tournament by scoring 36 goals and conceding only two.

Meanwhile, the Turkish president and officials congratulated the team following the overwhelming victory.

"I sincerely congratulate our national amputee football team, which wrote a great success story by winning the European Amputee Football Championship for the second time in a row," President Recep Tayyip Erdoğan said.

"Turkey is proud of you guys," he added.