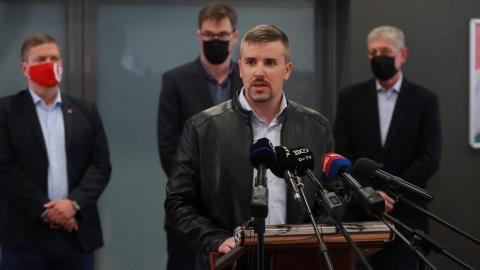 Supporters of Jobbik at an event to mark the 62nd anniversary of the 1956 uprising against communist rule and the Soviet Union in Budapest, Hungary, 23 October 2018. EPA-EFE/Balazs Mohai New European face

Most experts agree that today's Jobbik is very different from the radical far-right movement it was 15 years ago. A recent survey also revealed that although most Jobbik voters still tend to have strong nationalist sentiments and favour law and order, 19 per cent of them label themselves as liberals, 12 per cent as socialists or social democrats, and 10 per cent as greens. Jobbik politicians call that proof of becoming a true people's party.

"The moderation of the party started in 2013, but accelerated after the 2018 elections, when not just the ideology but the leadership changed," Daniel Rona, a political scientist and expert of the far-right, tells BIRN.

However, he also struggles to properly characterise the party, and has no better option than labelling it "populist".

"Peter Jakab is Hungary's Donald Trump - not necessarily in his ideology, but in his very effective way of reaching out to the frustrated, dissatisfied layers of society, who feel left behind by all other politicians," Rona says.

Political scientist Andrea Szabo from the Institute of Political Science describes Jakab as the "Orban of the opposition" based on his communications skills and charisma, though he lacks the expertise of the current prime minister.

Jakab's political stunts include presenting a sack of potatoes to Prime Minister Orban in parliament as a way to ridicule the Fidesz campaign strategy of winning over voters with cheap food handouts, and projecting Orban's face onto Hungary's most notorious prison building. Both...