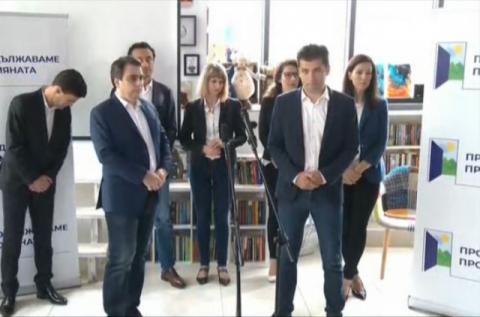 Kiril Petkov, one of the leaders of the new political project, believes that the newly formed coalition will win about 27-30% of the vote in the upcoming parliamentary elections.

In a riv interview he said he was pleasantly surprised by a poll that found it with 9% support, but said the campaign could multiply it by three.

Yesterday it was announced that the formation will use the registrations of the parties "Middle European Class" and VOLT, which will form a coalition named after the project of Kiril Petkov and Asen Vassilev.

In his speech, Petkov made a request that the political project will be the first political force in the upcoming parliamentary elections on November 14.

Recent opinion polls show that GERB currently enjoys the most support - a little over 20%.

The former Minister of Economy added that he was very happy when he heard that Hristo Ivanov and Maya Manolova had requested negotiations with  "Continuing the Change". Yesterday, the co-chair of Democratic Bulgaria even suggested running in the elections with common lists.

However Petkov declined the idea.

"From both the left and the right. In my opinion, we should not appear before the elections with a common list. We should agree on principles for a governing coalition," Petkov said.

Later in the conversation, he added that he liked many of Maya Manolova's policies.

"Our mission is to have 121 deputies who will be part of the coalition of integrity."

This will not happen with a political construction, but with the freedom of the voter," Petkov said.

He added that each formation has profiled itself in a certain topic, giving an example with "Stand up BG! We are coming" and social activities, as...