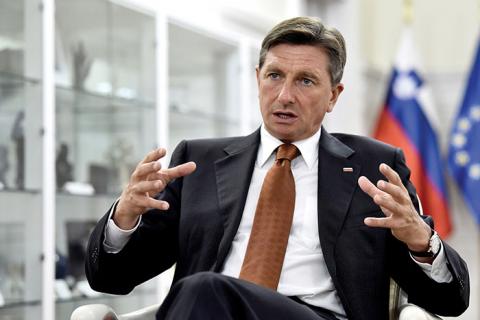 Moon received the Order of Merit for Distinguished Service, conferred for exceptional work and merits rendered in advancing the sovereignty, prosperity, renown and progress of Slovenia.

Pahor was given the Grand Order of Mugunghwa, the highest order awarded by the government of South Korea, which is conferred for outstanding services in the interest of promoting the development and security of the Republic of Korea.

In the talks, Moon welcomed Slovenia’s push for opening its embassy in Seoul within this year, as the two sides mark the 30th anniversary of forging diplomatic ties next year, according to South Korean press agency Yonhap.

Moon expressed hope that the new embassy, once established, would “play a meaningful role in promoting the mutual understanding of the two countries’ peoples and expanding trade”.

He said South Korea would consider opening an embassy in Ljubljana and would definitely soon launch an economic representation office in the Slovenian capital, according to Pahor’s office.

Pahor shared the expectation and proposed joint efforts for the broadening of shipping and logistics cooperation, especially using the Slovenian port of Koper, as well as trade and investment, Yonhap reported.

Moon also expressed hope for the expansion of partnerships on nuclear energy. He said South Korean firms could participate in upgrades of the Krško nuclear power plans and the planned construction of the new unit in Krško.