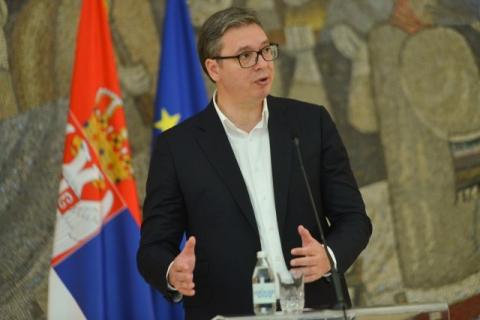 Addressing the public, President of Serbia, Aleksandar Vui, who chaired that session, said that he received a proposal for resolving the situation at Jarinje and Brnjak crossings yesterday, but that he rejected that proposal, for which he received the consent of the National Security Council.

1. Serbia will continue to insist on preserving peace, full stability and security, but also security for Serbs in Kosovo and Metohija;

2. Serbia considers inappropriate statements in which Belgrade and Pristina are equated and blame is shifted to both sides;

3. Serbia is ready to continue the dialogue in Brussels, but will not accept solutions imposed by unilateral criminal actions.

At the beginning of his address to the public, he said that the situation in the Serbian Army, as well as in the Ministry of Internal Affairs, armament of the army, as well as the police, which had been discussed before, was analyzed at today's session.
Vui also said that they discussed the situation in Kosovo and Metohija "especially after the criminal action of Pritina and the sixth intrusion in the Kosovo north, with armoured cars, long rifles and the mistreatment of the local population without prior notice to the mayors of four municipalities with a Serb majority."
"We have reached conclusions, Serbia will continue to insist on preserving peace and full security for Serbs in Kosovo and Metohija. Statements in which they equate us and say that both countries are guilty are inappropriate," he said.
„The only solution is the withdrawal, and then talks in Brussels to reach an agreement of possible," Vucic reiterated.
He also pointed out that yesterday he received a proposal from the EU and...