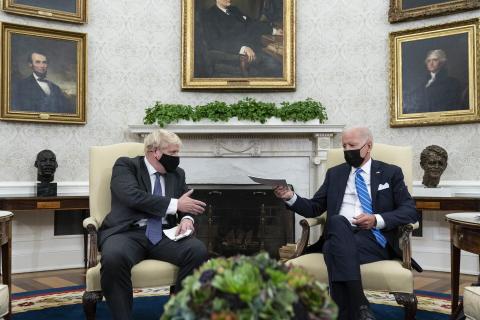 U.S. President Joe Biden on Sept. 21 refrained from making any commitment to a free trade agreement with the United Kingdom, only saying the issue was under discussion while receiving the British premier at the White House.

"We are going to have to work that through," said Biden, standing next to Prime Minister Boris Johnson, in answer to a question about a deal that Britain is pushing hard for.

Biden said the deal was "continuing to be discussed."

The Democratic U.S. president also warned he "would not at all like to see, nor might I add, would many of my Republican colleagues like to see, a change in the Irish accords" following the United Kingdom's exit from the European Union, but insisted they were "two different subjects."

Last week, the Democratic speaker of the House of Representatives, Nancy Pelosi, linked respecting the peace agreement in Northern Ireland, which provides for an open border with the Republic of Ireland, to any trade negotiations with London.

The U.K. government is currently embroiled in post-Brexit negotiations with the European bloc over customs arrangements for Northern Ireland.

The British prime minister hailed recent "great progress" in the relationship between London and Washington, calling the lifting of coronavirus pandemic-related restrictions on foreign travelers wishing to enter the United States "fantastic."

Johnson also praised the new strategic agreement between his country, the United States and Australia, which sparked fury in France, whose own deal to build submarines for Australia was scrapped as a result.