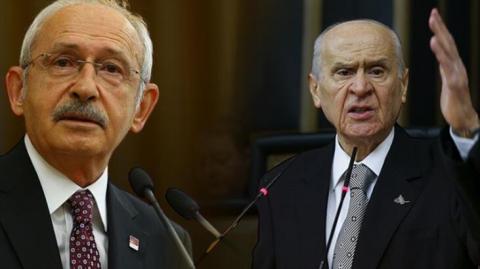 Nationalist Movement Party (MHP) leader Devlet Bahçeli slammed main opposition Republican People's Party (CHP) leader Kemal Kılıçdaroğlu over his comments regarding the Kurdish problem and that it can be solved together with the Peoples' Democratic Party (HDP).

"There is no such thing as a 'Kurdish problem' in Turkey. CHP Chair Kemal Kılıçdaroğlu has sought to formalize and legitimize his forbidden relationship and immoral partnership with the HDP by presenting it as if there is a problem that does not exist," he said on Sept. 21 in a statement.

Bahçeli claimed that the CHP administration has turned against Turkey in terms of its discourse, actions and ambitions, which has turned into a national security threat by becoming a "political outbreak and militant."

He argued that the party, CHP, which was founded by modern Turkey founder Mustafa Kemal Atatürk, fell under the control of "sinister hands, severed from its roots and identity to dangerous extents, and eventually lost its political center and moral metabolism by transforming and hybridizing."

Kılıçdaroğlu earlier said a legitimate body is needed for the Kurdish problem, which has not been resolved for almost 40 years, adding that they can solve the issue with the HDP.

Speaking in the first episode of the documentary "Mr. Kemal and His Alliances" by journalist and documentary filmmaker Günel Cantak, Kılıçdaroğlu said the HDP has public support and is represented in parliament.

In reply to the CHP leader's remarks, former HDP co-leader Sezai Temelli challenged Kılıçdaroğlu that the real interlocutor should be Abdullah Öcalan, the leader of the PKK who is imprisoned on İmralı Island, if there is a will to solve the problem.

Kos: Five remanded in custody on charges of migrant smuggling

Existing fence at Evros border to be extended further