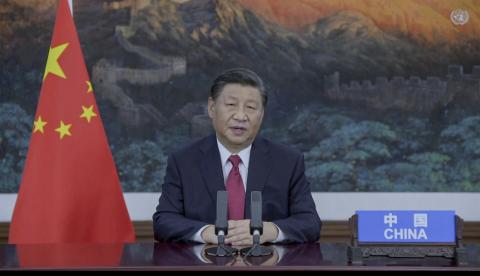 China will stop funding coal projects overseas, President Xi Jinping announced on Sept. 21, all but ending the flow of public aid for the dirty energy contributing to the climate crisis.

Xi made his announcement at the U.N. General Assembly where U.S. President Joe Biden, seeking to show leadership in a growing competition with China, promised to double Washington's contribution to countries hardest hit by climate change.

China is still investing in coal, reducing the impact of Xi's commitment, but it is by far the largest funder of coal projects in developing countries such as Indonesia, Vietnam and Bangladesh as it goes on a global infrastructure-building blitz with its Belt and Road Initiative.

Xi vowed to accelerate efforts for China, the world's largest emitter, to go carbon neutral by 2060.

"This requires tremendous hard work and we will make every effort to meet these goals," Xi said in a recorded address.

"China will step up support for other developing countries in developing green and low carbon energy and will not build new coal-fired power projects abroad," he said.

China's announcement follows similar moves by South Korea and Japan, the only other nations that offered significant funds for coal projects.

The climate advocacy movement 350.org called Xi's announcement "huge," saying it could be a "real game-changer" depending on when it takes effect.

Helen Mountford, vice president for climate and economics at the World Resources Institute, said it was "a historic turning point away from the world's dirtiest fossil fuel."

"China's pledge shows that the firehose of international public financing for coal is being turned off," she said.

But she said that private investors needed to make...

Couple who communicated, married through Google Translate fall out of love