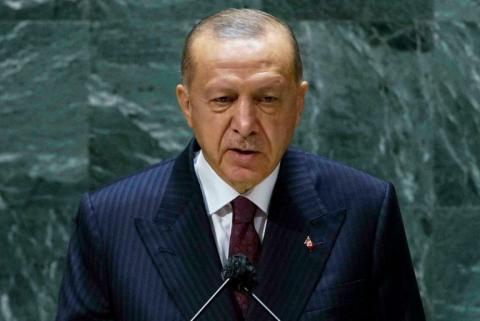 Amidst renewed provocations against Greece and Cyprus in the Eastern Mediterranean and after an informal moratorium in summer, Turkish President Recep Tayyip Erdogan in his address to the 76th UN General Assembly (UNGA) yesterday presented his government's steadfast views on the geopolitics of the region and Ankara's claims.

Though Erdogan did not directly speak of a two-state solution to the Cyprus problem which he, followed by Turkish Cypriot leader Ersin Tatar, have unswervingly demanded in the latest efforts to jump-start Cyprus talks, he made it clear by complaining that Tatar was not invited to address the UNGA, as was the island's sole internationally recognised leader, Cyprus' President Nicos Anastasiades.

Though Erdogan's rhetoric was diplomatic, a far cry from his and his ministers' frequent outbursts of late against Greece and Cyprus, he clearly articulated his core claims, which have been rejected by strong geopolitical players - the UN, the US, the EU, and Russia - as violating international law.

Complaint over Tatar not being invited to address UNGA

"A fair, lasting and sustainable solution to the Cyprus issue is possible only through a result-oriented, realistic approach. While the leader of one of the two peoples on the Island, which the United Nations considers as equal, can address you, it is not fair that the other leader cannot make his voice heard on this platform," Erdogan said.

Only the heads of internationally state and government, sometimes represented by their foreign ministers, address the UNGA.

Erdogan was referring to Tatar as the leader of the breakaway state in Turkish-occupied northern Cyprus, which 38 years after its establishment by Ankara is still...