Istanbul to get back iconic artifact from the Netherlands 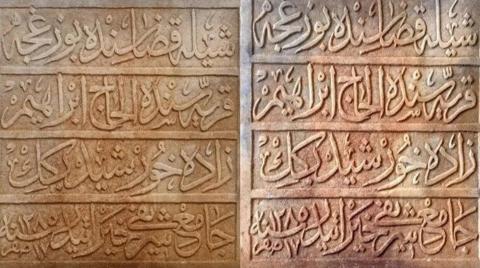 An inscription that was smuggled abroad years ago despite belonging to a "lost mosque" in Istanbul is on the way back home thanks to initiatives of the city's local authorities.

The Istanbul Metropolitan Municipality has purchased the inscription that reportedly belongs to the historic Bozgoca Mosque at an auction held in the Netherlands on Sept. 17 for 4,600 euros.

The purchase cost 5,665 euros, including duties and taxes.

The inscription will be brought to the Turkish metropolis next week and exhibited in the newly established Istanbul City Museum, according to an official.

It is known as the last surviving artifact of the mosque which was built during the Ottoman period but could not stand sturdy to this day due to various reasons.

The 45-centimeter-wide and 48-centimeter-long historical inscription was hand-engraved with Ottoman letters with a four-sided marble, reportedly in 1869.

"We are an administration tasked with preserving the memory of the city, and we will continue to work in this direction," said Mahir Polat, the deputy secretary-general of the municipality, regarding the purchase.

Nearly 3,000 historical artifacts were returned to Turkey between 2011 and 2021, according to official figures.