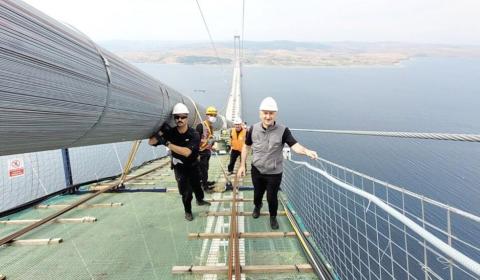 The countdown has started for the opening of the 1915 Çanakkale Bridge in northwestern Turkey, Turkish Transportation and Infrastructure Minister Adil Karaismailoğlu said on Sept. 20.

"As the deck slabs are installed, the construction of the 1915 Çanakkale Bridge is completed to a large extent. Only the deck slabs near the towers are to be installed after this. We can say that the countdown has begun for the dreams of centuries," he said, before walking on the catwalk from the Asian side of the Dardanelles Strait toward the European side of the northwestern Çanakkale province.

The multibillion-dollar bridge's opening is slated for March 18, 2022, the 107th anniversary of the Ottoman
Empire's historical victory in the region during the First World War.

"The contractor company has spent 2.3 billion euros for the construction," said the minister, adding that the government has paid an extra 579 million liras (nearly $70 million) for expropriation.

More than 5,000 workers will continue work round the clock to finish the job before the deadline, he said.
The giant structure will be connected to the Malkara-Çanakkale Motorway and will be the most important part of the 101-kilometer route.

The bridge on the Strait of Gallipoli will be included in this network as the most important link in the chain, which will connect Turkey's provinces bordering Bulgaria and Greece to the Aegean and Mediterranean regions in the south.