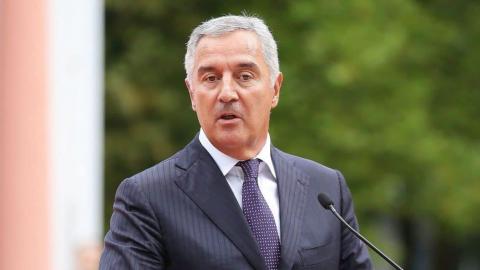 "By calling for conflict on the day of the enthronement of the Serbian Orthodox Church's Metropolitan and announcing his attendance at the protests, the Montenegrin president directly violated the constitution," said the text of the initiative, which was drafted by the parliamentary constitutional council.

"By his own example and contrary to the constitution, Djukanovic called on citizens to protest and obstruct the Serbian Orthodox Church religious ceremony in Cetinje," it added.

The parliamentary constitutional council also alleged that Djukanovic violated constitutional articles that prohibit the incitement of hatred and discrimination.

The initiative is a first step that could eventually lead to a parliamentary no-confidence vote in President Djukanovic. First however the Constitutional Court must rule on whether he violated the constitution or not.

Dragan Ivanovic, an MP from For the Future of Montenegro, which is part of the ruling majority, said that Djukanovic was promoting chaos in the country.

"Djukanovic supported the protests against the main religious community in the country, even he has to be president of all Montenegrin citizens," said Ivanovic.

At the violent protest in Cetinje on September 5, opposition supporters and self-declared patriotic groups clashed with police while trying to stop the enthronement of a Metropolitan Joanikije in Montenegro's old royal capital, which the protesters claimed was an insult to their country's struggle for sovereignty.

Police had to remove roadblocks erected near Cetinje that were designed to stop clerics from reaching the town for the ceremony, while the Serbian Orthodox...