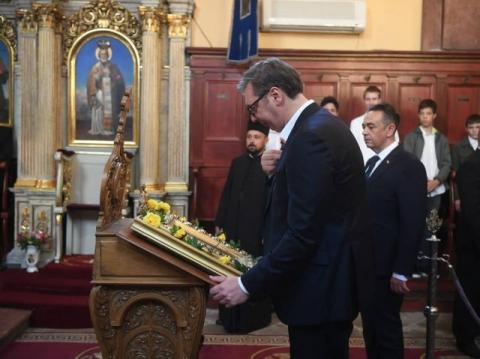 He also said that Pristina should return everything to the state of affairs prior to September 20, and that only after that we can talk.
"Because you understand what he is talking about? He is talking about people who are not so familiar with the facts and sells fog. I have seen all kinds of fog sellers and matchmakers in my life and that is why I recognize them as soon as I see them. He says he will withdraw measures when Serbia recognizes independent Kosovo," Vui pointed out in a statement to the media in Budapest.
At the suggestion of the EU to hold a meeting between Vui and Kurti in Brussels and try to resolve the situation in the north of Kosovo and Metohija, Vui said that they could organize whatever they wanted, and that he would not accept anything.
"Go back to what it was prior to September 20, and then we can talk about everything," he pointed out. He also said that he was astonished by the fact that there are media in Serbia that say that Serbia has taken some measures, and Serbia has not taken any unilateral measures. He reminded what kind of campaign was conducted against Serbia in connection with the train with icons and monasteries, which was stopped near Raska. He also asked what action Serbia carried out in Cetinje, what it had to do with the barricades.
"All of them are bothered by a strong Serbia. Because you think that it is possible to have 120 texts in one day in Croatia about me, without saying a single word, we have not done anything," he explained.
Vui said that they did not attack Serbia in 2006 or 2008, when they "loved" us because we were weak and fragile, the economy was collapsing and Serbia was disappearing.
These, he says, are the reasons for all the lies coming from Pristina. "The relationship is...