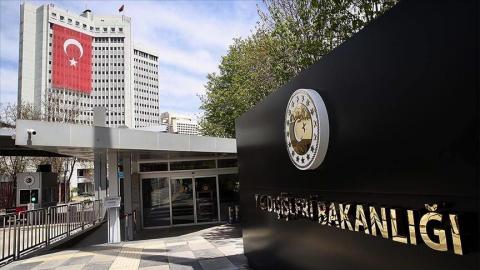 Turkey's Foreign Ministry on Sept. 23 called on Greece to face the facts regarding the massacre of Turks in Tripolice, the administrative center of the Peloponnese which was besieged by Greek rebels in 1821.

In a Twitter message posted on the occasion of the 200th anniversary of the incident, the ministry reminded that tens of thousands of Turks were "brutally murdered" in Tripolice.

"This inhumane massacre, which aimed not to let a single Turk survive in the Peloponnese, has been written as a black mark in history. Those who make the mistake of educating others by distorting the historical facts at every opportunity should know that their own atrocities can never be forgotten, and they should face the facts sincerely," the ministry said.

Tripolice was the administrative center of the Peloponnese province in the southern region of Greece and had been ruled by the Ottoman Empire since the end of the 14th century.

A large number of wealthy Turks, Jews and Muslim Albanians lived in the city, which is known today as Tripoli in Greek.

The city, which was besieged by Greek rebels in 1821, passed to the control of the rebels after the gates of the city's castle were opened as a result of the agreement made upon the Turks surrendering their weapons and leaving the city en masse.

There are testimonies of many European soldiers, historians and Greek leaders about the massacre of the Turks in the city by not complying with the agreement, and also stating that between 10,000-25,000 Turkish-Muslims were killed.