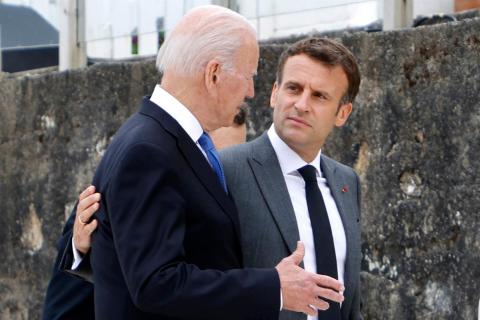 U.S. President Joe Biden and his French counterpart Emmanuel Macron had a "friendly" phone call on Sept. 22 to defuse a deep row over submarine sales to Australia, promising to meet in person to repair the transatlantic relationship.

The call, which the White House said lasted about 30 minutes, was the first between Biden and Macron since France recalled its ambassador over the surprise U.S. announcement of a deal to build nuclear submarines for Australia, scuppering a previous French deal to sell conventional submarines.

Paris called the U.S.-Australian plan, which was launched as part of a new Indo-Pacific security group along with Britain, a stab in the back and also pulled its ambassador from Australia.

In a joint statement after the call, the two leaders vowed to launch "in-depth consultations... for ensuring confidence" and to meet in Europe at the end of October. The statement also said Macron would order France's ambassador back to Washington next week.

White House Press Secretary Jen Psaki told reporters the talk "was friendly" and Biden was "hopeful this was a step in returning to normal."

The statement said the U.S. recognized the need for stronger European defense to complement the NATO military alliance, a key idea repeatedly floated by the French leader.

In what amounted to an acknowledgement of French anger, the English-language version of the statement issued by the White House said that the management of the dueling submarine deals "would have benefited from open consultations among allies."

The French-language version issued by the Elysee Palace was even more explicit, saying consultations "would have avoided this situation."

There was no word about where the October meeting will be but...