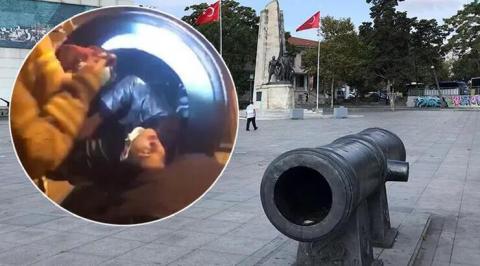 A local man who got stuck inside a historic cannon he entered for a photo was rescued by emergency teams, getting what he wants eventually in an unusual way: Lots of photos taken while he was in a cannon.

Identified only by initials T.K., the man entered into an Ottoman-era iron muzzleloader cannon on display in Istanbul's Barbaros Square but got stuck inside the historic weapon somehow.

He tried to get out of the bore of the cannon by himself at first but could not make it, so he asked for help from people around the square. Emergency teams were informed following the failed efforts.

Arriving at the scene in a short time, firefighters in the Beşiktaş district managed to get the man out of the cannon by pouring oil on his knee and foot. He was in good health, according to reports.

It turned out that the man got into the cannon to take a photo. The rescue operation was photographed by the people around, which led the incident to become a trending topic on social media.

It is believed that the cannon on the square along the seaside was at least 300 years old and was used by the Ottoman navy at the time. Large cannons, artillery line and a monument commemorating Turkish seamen sits at the center of the Barbaros Square.