‘Parthenon of film museums’ to open in LA 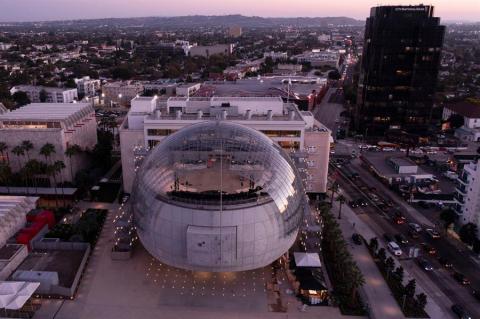 Los Angeles is finally getting a museum for movies - and it's about time, said Tom Hanks, as he welcomed journalists to a special pre-opening event on Sept. 21.

The world capital of filmmaking and home of Hollywood boasts museums for everything from natural history to selfies, but until now has never had one dedicated to the silver screen. After decades of delays, the Academy Museum of Motion Pictures opens to the public next week.

"It matters for Los Angeles to have this film museum," said double-Oscar winner Hanks, who serves as a trustee.
"We all know that films are made everywhere in the world, and they are wonderful films. And there are other cities with film museums.
"But with all due respect, a place like Los Angeles, created by the Motion Picture Academy... This museum has really got to be the Parthenon of such places."

Upon opening, the museum, run by the Oscar-awarding Academy, will be the largest film-dedicated museum in North America. Drawing on some $390 million funding from Hollywood institutions old and new -- including Disney, Warner and Netflix -- and beyond, the building was designed by famed architect Renzo Piano. Piano reworked a historic 1930s department store to house the museum's main galleries.

He added the gleaming, orb-shaped David Geffen Theater, which appears to hover above the museum's courtyard, inviting some obvious comparisons to the "Star Wars" films.
"Don't call this the Death Star!" joked Piano, at the press conference. "Call it the Zeppelin. A Zeppelin to take you [to] a different world."

The museum presents a broad overview of more than a century of motion pictures from around the world.
Modern Tinseltown treasures include costumes from "Bram Stoker's Dracula," an orc...