Serbs remained at the barricades, people bring them wood to keep warm; The EU appeals 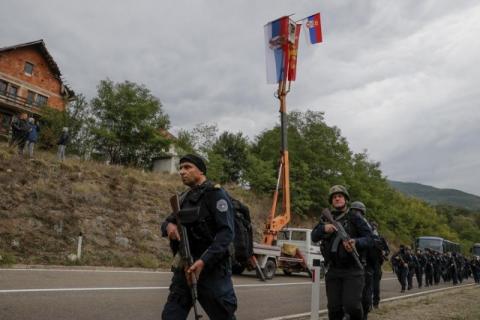 ROSU Special Units are still deployed there.
At the administrative crossings of Jarinje, Brnjak and Merdare, the situation is calm, but tense. ROSU special units are still in the north of the province, where they have been deployed due to Pristina's recent decision to replace the license plates with temporary ones, which has increased tensions in the north and caused concern among the locals.

Serbs are warming up at the Jarinje crossing, where they spent another sleepless night.
They do not intend to leave the crossing until Pristina withdraws its decision to replace Serbian license plates with Kosovo ones.

The EU called for urgent de-escalation

The European Union last night called for an urgent de-escalation of the situation in northern Kosovo and said that all provocations or unilateral actions must be avoided because they would be directly against the interests of citizens in the region.
"We call on the leadership of Belgrade and Pristina to take a responsible approach and, through EU-mediated dialogue, avoid any further escalation, re-establish a peaceful atmosphere and work towards achievable solutions. It is in everyone's interest to find ways to allow freedom of movement and improve everyday life", reads the statement of the EU High Representative for Foreign Affairs, Josep Borrell, regarding the situation in the north of Kosovo.

The citizens at the crossings received wood to keep warm. Last night, the leaders of the Serbian List and the mayors from the...