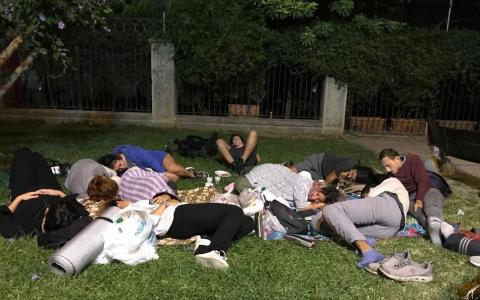 A movement started by a group of students to draw attention to the sky-high dormitory and rental apartment costs across the country, especially in the Turkish metropolis of Istanbul, continues to expand with more and more students becoming a part of it.

Member of a group calling itself Barınamıyoruz (We Can't Take Shelter) Movement came together in Istanbul's Beşiktaş district this time and spent the night sleeping on the benches in the Şairler Park in Vişnezade neighborhood.

Noting that they meet on park benches which are seen as the most accessible option to make their voices heard, students expect support from all university communities, NGOs, political parties and public figures.

Mert Sarıkaya, a student of Istanbul Technical University who came to the city from the Aegean province of İzmir with his sister - also a student - about two weeks ago, highlighted how difficult it has become to find accommodation these days.

Sarıkaya stated that despite looking for flats on rent in Şişli, Beşiktaş and Kağıthane districts for quite some time, he still couldn't get his hands on a decent one.

"One has to think of spending at least 3,500 Turkish Liras ($400) a month as rent. The flats below that price are either windowless, low-level or filthy," Sarıkaya noted.

Kardelen Şahin, a student from Mimar Sinan Fine Arts University, said that she could not find a dormitory and that she was having a hard time finding a flat.

In addition to Istanbul, students in Ankara, İzmir and Kocaeli also started to put up for the night at parks as...