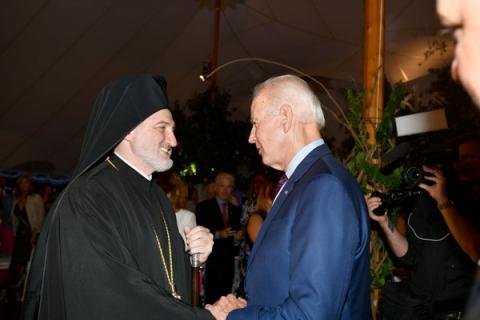 Those who are at all familiar with the Eastern Orthodox Church are well aware that Archbishop Elpidophoros (Lambriniadis) of America long before becoming leader of the Greek Orthodox Church in the US was one of its most eminent and respected hierarchs.

For the Ecumenical Patriarchate, which has spiritual authority over the Church in America, Elpidophoros, 54, is the best and the brightest that it has to offer.

He is the protégé of Ecumenical Patriarch Vartholomeos who discerned the young Ioannis Lambriniadis' intellectual and spiritual gifts and took him under his wing after the young layman finished his studies in Germany. He went on to get a Ph.D. in Theology from the University of Thessaloniki, where he was elected Assistant Professor of Symbolics, Inter-Orthodox Relations and the Ecumenical Movement, achieving the rank of full professor in 2018.

When he ordained him, Vartholomeos gave his deacon the name Elpidophoros - or hope-bearer - and many in the Church later saw that as foreshadowing his high hopes and future plans for the young deacon, whom he saw as his prospective successor early on.

Some would say was he groomed for the job as he slowly but confidently climbed the rungs of the Church hierarchy from deacon to Chief Secretary of the Holy Synod and Metropolitan bishop, and Abbot of the Monastery of the Holy Trinity at the Theological School of Halki.

Entrusting Elpidophoros with pursuing and bringing more international attention to one of his most fervent goals is just one more indication of the nature of the relationship between Vartholomeos and Elpidophoros.

It is one of absolute trust on the one hand and absolute loyalty on the other.