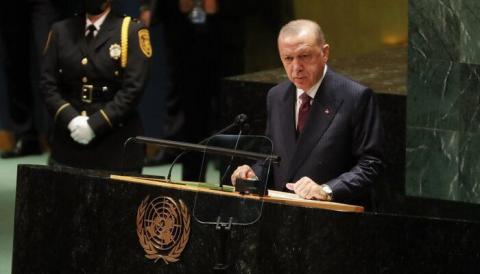 After two decades in Afghanistan, the United States should do more to help the country's refugees, Turkish President Recep Tayyip Erdogan said in remarks aired on Sept. 22.

Turkey hosts the world's largest refugee population - some 4 million, mostly Syrians - and has warned that it cannot accept any more arrivals from Afghanistan.

"Right now, the U.S. is failing to meet its obligations. We have more than 300,000 Afghan refugees and we will no longer be able to afford to welcome any more Afghan refugees in Turkey," Erdogan said in a preview of a CBS interview due to be broadcast Sunday.

"Of course, the U.S. should do a lot and should invest a lot because the U.S. has been there for the last 20 years but why, why? First, these questions should be answered by the U.S."

Afghan refugees have been fleeing their country since last month, when the Taliban swept back into power as U.S. forces prepared to withdraw from the country at the end of August.

A day earlier, Erdogan used his speech to the U.N. General Assembly in New York to warn of a potential wave of refugees sparked by climate change. Turkey is experiencing growing discontent at the levels of migration since the start of the Syrian conflict a decade ago.

The government is in the process of bolstering security on its eastern border with Iran, including a wall, amid fears that the Taliban's rule could drive refugees, many trying to reach Europe, to Turkey's frontier.

Meanwhile, Erdoğan met on Sept. 22 with his counterparts and other leaders in New York, where he is attending the 76th session of the U.N. General Assembly.