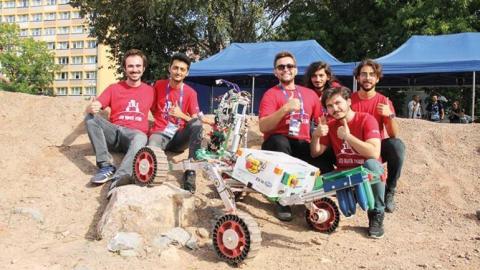 A rover team of a Turkish university won a grand prize at the biggest European competition focused on space and robotics, reaching the first and second ranks in different categories.

The rover team of Istanbul Technical University (İTÜ) has returned from Poland with two prizes in hand from the European Rover Challenge held in the country's Kielce town.

The fifth-generation rover developed by the team completed a string of tasks for prizes in the competition that brought together 57 university teams from around the world.

The competition involved building rovers and competing with them in tasks similar to those performed by rovers on the surfaces of Mars and the Moon.

Rovers competing in the competition tried to do tasks such as overcoming obstacles, lifting with a robot arm, and maneuvering.

Competing on a track, whose surface was inspired by the 'Elysium Planitia' of the volcanic plain of Mars, the team came first in the Robot Arm mission.

The teams also competed for the proper collection and transfer of samples each rover is programmed to pick from simulated surfaces.

Scoring 585.6 points in the general category, the team ranked second after Poland's IMPULS team, while Switzerland's EPFL XPLORE team came in third. The team celebrated by unfurling the Turkish flag at the award ceremony.

"We set out with a team of 46 people a year ago and everyone had a great effort. We also won a bronze medal in the University Rover Challenge, another international competition held in the U.S. in 2020," said Semih Çolakoğlu, organization leader of the team.

"This has been a great source of motivation," he noted, adding that the team members sacrificed their time and worked hard and...