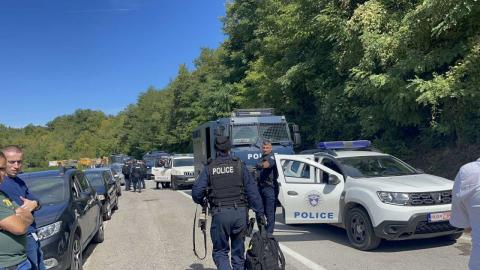 Kosovo's police inspectorate did not make clear on Friday whether or not it intends to further investigate the alleged beating by police of three ethnic Serbs near the border with Serbia, where tensions are high amid continuing protests parked by a dispute between Pristina and Belgrade over vehicle licence plates.

Serbian-language media in Kosovo reported on Thursday that the three Serb men were beaten by the police in Bernjak/Brnjak, in the Serb-majority north of Kosovo, close to the border with Serbia, which has been blockaded by protesters.

The Kossev news website published video footage of three men who were admitted to hospital in North Mitrovica, claiming they were verbally abused and beaten by Kosovo police in Bernjak/Brnjak, where they were allegedly collecting wood.

But Baki Kelani, spokesperson for the Kosovo police, told BIRN on Friday that "the case of the alleged beating of three ethnic Serbs has been publicly denied by the police".

Kelani added that he "cannot say" if there will be a further investigation, but insisted that "the three people who were stopped by the police were Albanians".

In a statement on Thursday, Kosovo police described the claims in Serbian-language media as "tendentious and untrue".

It claimed that the report "aims to misinform the public, to present a situation of insecurity for citizens as well as to fulfill various political ambitions oriented from outside [Kosovo]".

It said that the police "detained, verified and then released three drivers of Kosovar nationality, who were instructed to report to the police station South Mitrovica".