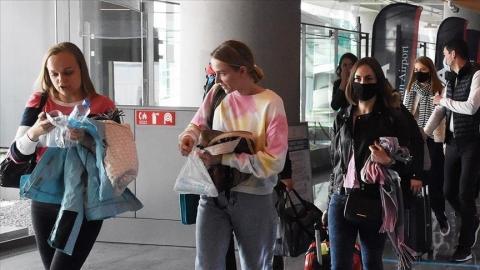 Some 10 planes carrying nearly 1,500 British tourists have arrived in Turkey's southwestern Muğla province since the U.K. removed Turkey from its COVID-19 travel red list, an official said on Sept. 24.

Starting Wednesday, Britons are traveling to Turkey without compulsory hotel quarantine upon return, a move which eases travel and tourism between the two countries.

Muğla is one of the most preferred holiday centers for British tourists. More than a million British citizens spend their holidays in Muğla's favorite tourism resorts Bodrum, Marmaris, Fethiye and surrounding areas every year.

"When we look at the pre-pandemic period, an average of 90,000 tourists from the UK visited Turkey in October. This figure is nearly 60,000 for now, but reservations still continue. We believe that we can reach pre-pandemic numbers again," Güvenç said.

As many as 1,000 people booked for holidays in Muğla over the past two days, he added.

"We have been to there several times before. With the resumption of flights, we came for a holiday with our child. We love Turkey and longed for Muğla during the pandemic," British citizen Peters Steven, who is accompanying his wife, told Anadolu Agency.

Turkish authorities implement strict measures to prevent the spread of COVID-19 in planes, airports and hotels to ensure tourists have a healthy and secure holiday.

Ukraine uses Turkish armed drone in Donbas for 1st time
Who Has Spent The Most Time In Space? (infographic)